Topics in the History of Financial Mathematics: History of Optimization 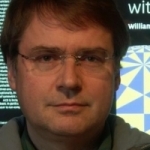 This is the second part of a study day. It includes the following talks:
Introduction by Simon Gardiner

The event looks at the development of mathematics in a commercial and financial context. Starting with early commerce, through to the development of double entry book keeping, (Amatino Manucci), development of accounting (Luca Pacioli), theory of speculation (Louis Bachelier), history of optimisation, cash and foreign exchange, Black Scholes option pricing models, chaos and misbehaviour of markets with interesting twists.

The event is chaired by Michael Mainelli and Simon Gardiner.

Topics in the History of Financial Mathematics

There is currently no biographical information for this speaker.

Professor of Financial Mathematics within the Mathematics Department at the King's College London, William Shaw received his doctorate in mathematics from the University of Oxford...

Van Eyck's The Virgin with the Canon: Visual Disability and Societal Attitudes as Depicted in the Northern Renaissance

An Introduction to Paradoxes